Today, we speak to a DJ who has been in the game long before this writer was even born. With nearly twenty-five years of experience under his belt, this week we humbly invite Basilisk to Electric Soul Radio #14 for an interview! You can see his mix here.

Toronto-native Basilisk began DJ-ing in the underground scene in the 90s. He has moved around to parts of Asia and Southeast Asia before settling down in Taiwan. Over his career, he has performed under several monikers and played almost every style possible. A dedicated DJ who's keen on creating stylistic mixes that intertwines genres, read on to know more about this record-label founder, his ambitions, and many more!

1. Hi Basilisk! Welcome to our 14th edition of Electric Soul Radio! Can you introduce yourself to our readers around the world?
Greetings! I’m a veteran multi-genre DJ, label owner, and all-round music enthusiast currently based in Taipei, Taiwan. Although I’ve been playing out for decades I spent most of the last several years in the shadows, rethinking my approach to DJing, audio engineering, and music curation. The pandemic provided some extra time to complete this process of creative regeneration and I look forward to sharing ambitious new mixes from the studio—as well as performing live once the chaos subsides.

I also co-founded Techgnosis Records alongside Ben Rama in 2015. Since then it has grown to become one of the most widely known and respected of the new generation of psychedelic techno labels. Ben deserves all the credit for Techgnosis becoming an international phenomenon, but I regularly showcase tunes from the label in my mixes and thoroughly love spreading the gospel of psychedelic techno.

2. You go by several names. How are the styles for each moniker different from one another?
Over the years I’ve adopted various guises to experiment with different styles and approaches but recently decided to incorporate all my musical interests into my original identity as Basilisk. Previously I was attempting to cater to the expectations of those organizers and fans who prefer hearing only one clearly-defined sound from a project, but nowadays I’m embracing my true nature as a musical polyglot and making diversity my brand.

3. Can you describe the feeling or headspace when you’re DJing?
I’m more of a cerebral DJ than a showman so my headspace is usually focused and intense. I’m not just pressing play when I perform; I make extensive use of EQ, filters, and effects to layer and combine tracks, reshaping source material into new configurations. My sets are seldom planned so I also devote considerable mental energy to mapping out different pathways and directions, imagining how those possibilities fit into the overall storyline.

4. We see that you play psychedelic techno, psytrance, progressive house, electro breaks. Which are your personal favourite genres?
My roots are in the psytrance scene, which is its own microcosm with subgenres as different from one another as house and techno, so I grew up with a healthy appreciation for diversity in sound. When psytrance grew formulaic in the mid-2000s I set out to explore adjacent genres like progressive house and techno, but I soon found myself roaming even further afield. Eventually I realized I really enjoy being musically promiscuous, and rather not focus on just one genre.

That being said, there’s a common thread running through most of what I appreciate and play out. Whatever the style, I am drawn to distinctive hooks and melodies, hypnotic and intoxicating atmospheres, and intricate rhythmic programming. I tend to avoid simplistic and monotonous arrangements and production styles that seem too plastic or dissonant. Working with more dynamic sounds across genres ensures that my sets are never stale.

5. Can you describe the mix you made for Electric Soul Radio?
This mix is intended as an introduction to some of the many styles I play, from experimental breakbeats to dub techno and leftfield house. Psychedelic techno forms the central core of the mix, which includes three tracks from Techgnosis Records, but there’s always a sense of movement and transformation as the story unfolds. With a BPM range of 108 to 132 it also accelerates rapidly, reaching a sizzling climax with several progressive psytrance floor burners before making a smooth descent, leaving listeners with a positive message. It’s an entire trip in 100 minutes, always evolving and hopefully never boring.

6. What got you interested in becoming a DJ in the first place?
It was entirely accidental, and largely a byproduct of getting into vinyl record collecting in the late 1990s. Many of my friends were DJs and they encouraged me to jump on the decks at house parties and such, just to mess around. At that time I was mainly into Goa trance, a style rarely heard at raves in Canada, so at some point I decided to get serious about it. Sharing my enduring passion for music has been my motivation for DJing ever since.

7. You’ve shared with us that you’ve moved to Taiwan. Where were you from, and how long have you been in Taiwan?
I’m originally from Toronto, Canada, but I’ve spent most of the last decade bouncing around East and Southeast Asia. Most of that time was spent in Taiwan, but it was only in the last few years that I decided to stay. Living overseas is an extraordinary experience, one that continually challenges me to grow, as a person and an artist. 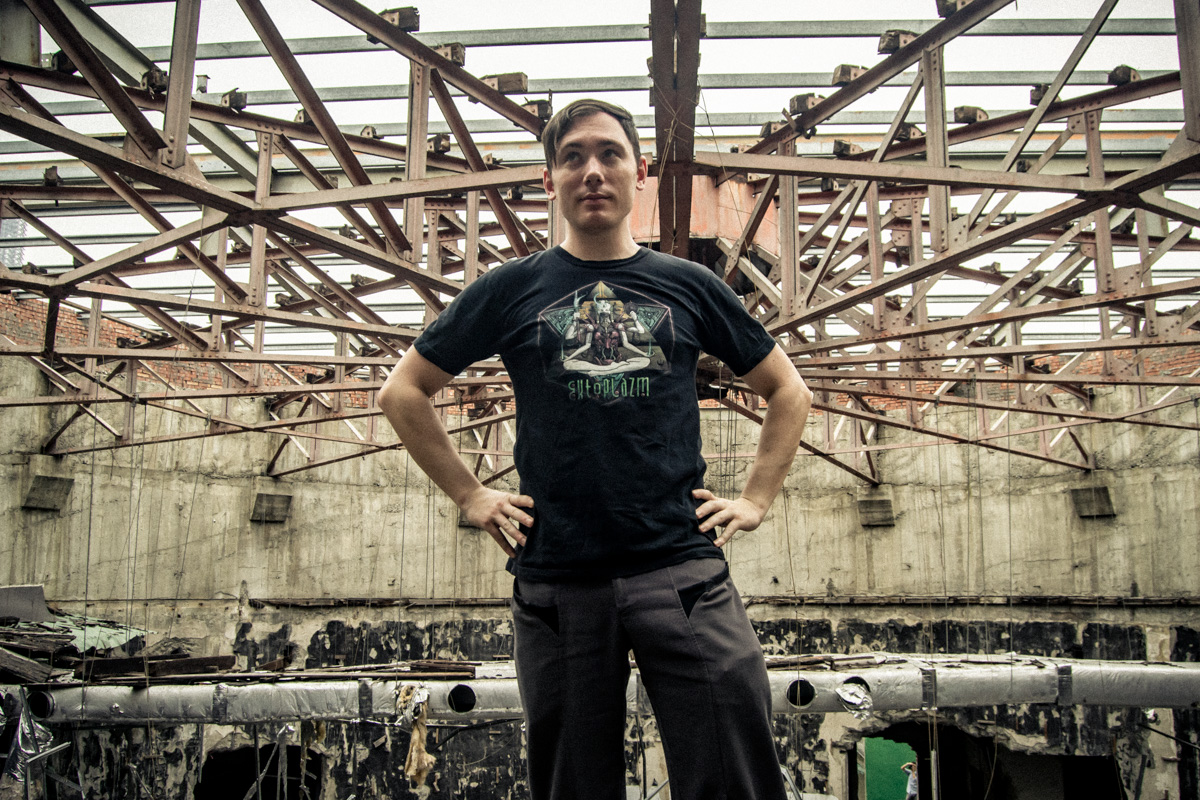 8. Out of all the Asian countries, why did you choose to move to Taiwan?
Taiwan is a fascinating country with an amazing history, vibrant culture, and no shortage of natural wonders to explore. Everyday life is also convenient, with excellent public transportation and almost endless dining options. The urban environment is ultra-dense but also humanistic; plant life explodes out of every drab apartment block, and the streets shimmer and pulse with activity. For whatever reason this constant stimulation fuels my productive drive and keeps me feeling upbeat and creative.

7. You’ve been in Taiwan for quite some time. What were some of your favourite and memorable events or festivals that you’ve played in Taiwan?
I haven’t been playing out too much these years, but I’ve had memorable experiences at both Earthfest, which is primarily a psytrance festival, and Organik, a more internationally famous event held at an amazing location on the Pacific coast. I was also a regular at Korner, and my time there strongly influenced the development of my musical interests, introducing me to contemporary forms of techno and house, as well as more avant-garde styles and approaches. More recently I’ve been enjoying creative exchanges with the Evaporate crew, several of whom have already been featured here on Electric Soul.

9. Are you working on any new music or releases this year?
I’ve already recorded nearly 40 hours of new mixes in 2021—and not because of the pandemic or anything! With my new workflow in place I am better prepared to produce high-quality content with a wide stylistic range. Some of my new projects are a little crazy; Uroboros 1, for example, is eight hours long and never repeats any label or artist before spiralling back to where it began, forming a loop.

I’ve also been producing custom DJ edits in Ableton Live. Most of these are fairly minor but some involve completely rearranging the original track. These almost certainly won’t be released (except perhaps on SoundCloud), but you can hear some in my sets from time to time.

10. You’re also the co-founder of Techgnosis Records. What artists and releases should we keep an eye out for?
Ben Rama maintains an aggressive release schedule for the label, and there’s no shortage of great new tunes coming out. The flagship Techgnosis label compilations provide a great introduction to the psychedelic techno sound, and the NOX series is loaded with darker and more minimalistic psytrance offerings. Luis M, Aleckat, Trilingo, Peter Groskreutz, and Lampé routinely deliver some of the label’s most reliable dance floor bombs, while I’d recommend Ben Rama, Quantaloop, and MYDÄ for anyone looking to spice up their sets with something more entrancing and psychedelic.

11. What clubs or collectives in Taipei would you recommend to our international readers, if they ever come to Taiwan?
It might be a completely different scene by the time the borders open, but you’ll probably want to start with one of the more well-known underground clubs in Taipei. Pawnshop, the spiritual successor to Korner, is a club with global ambitions and a killer sound system; they focus on techno and house with occasional forays into more experimental territory. Final is more eclectic, flirting with the post-club aesthetic and hyper-local forms of expression. B1 recently closed but will probably return in some form or another; it was a good choice for anyone seeking more of a casual night out with quality house, techno, or breaks. Pipe is an old pump station along the riverside; many of Taipei’s psytrance crews host one-off events there.

As for specific promoters, Basika is a big-budget techno affair, new on the scene and already making waves; Resonant and ANKR is producing top-notch techno events and audiovisual content; HSTL is a solid choice for house music fans; and the aforementioned Evaporate crew always throw down great house and techno events. Finally, there are Burner events and bush parties if you know where to look, but these parties aren’t always public so you’ll probably have to make some connections before you go.

Keep up with Basilisk on Electric Soul, Facebook, Soundcloud, and Mixcloud.