Brian Hioe:  Where did the idea for the ANGEL TRANCE party come from? Could you talk a bit about what got you inspired to hold the party?

Hojo:  The idea for ANGEL TRANCE came, in general, from the resurgence of trance in people’s DJ sets all over the world, and in specific, from the release of the Cyber Trance presents Ayu Trance reissues. These being trance remix compilations of J-Pop star Ayumi Hamasaki. I got a chance to review the second volume for a blog I write for, and had a real good time reliving that music and thinking about its meaning in a 2022 context. After sharing the review, Andrew Hsieh of No Ging No Gain crew pinged me saying we should throw a Cyber Trance party, and I said sure why not!

BH:  What are you hoping to bring to Taipei’s music scene with the party, as a form of intervention?

Angel Trance as a genre in Moscow (per the i-D article you posted) sought to distinguish itself from the dark aesthetic associated with much of the party scene, so part of it is aesthetic, but I’m also curious about the musical choice–particularly regarding trance–which is seen less in the Taipei underground scene these days. 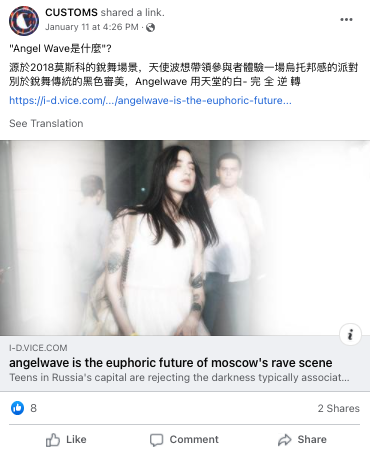 H:  Yeah, to be progressive, melodic trance is this, like, super positive, super euphoric music, and I think that aspect, in particular, has hastened its revival now in our pandemic stricken reality. People at this point are often looking for euphoric, escapist release when allowed to go out, and I wanted to cast aside all pretense and really lean into this aspect.

The aesthetic movement in that article I posted has stuck with me a lot since I first saw it, they seemed very eloquent about their purpose for developing the idea. I wanted to also see if those ideas translate, intentionally or unintentionally, just by importing the “rules” of the aesthetic.

Before the pandemic, my main reason for throwing parties has been to bring artists from outside Taiwan here, bridging underground movements or scenes and hopefully reinforcing Taiwan’s global interconnectivity as a means of cultural identity and purpose. So maybe since I can’t physically bring artists here I can bring in slices of what I see in the rest of the world instead.

BH:  Could you talk a bit about the line-up? What are you expecting each of them to bring to the table?

H:  Me and Andrew split the lineup 50/50 basically, asking our friends who would be really excited to play this kind of party. Andrew and Zephec have been DJing as a duo for quite a while so that makes sense. Nowufukup is the designer who made the fantastic poster and that little animation, he’s been super excited since day one, along with NGNG’s Hao Luo.

I’ve played with Wu Hun many times before, most recently at my Nightcore party back in December, but when I was first tossing the idea for this party around he basically demanded to be a part of it so how could I refuse?

Monofee and Public Property Princess I consider the headliners of the party. I knew Monofee as the partner of Yearning Kru (and through her releases on Quantum Natives) so I was super surprised to learn from Andrew that she was quite the accomplished trance DJ. Public Property Princess is, of course, is the manager of Final and I’ve heard her play a lot of trance during her sets before so I knew she was more than capable.

BH:  Can you share some songs for listeners to get a sense of the sound?

Ayumi Hamasaki - M (Above and Beyond Mix)

H:  We want everyone to look extra angelic for the night, so if you dress in white or reflective material, we’ll discount the event from 500 to 300 NT! See you in Heaven.