Toward an Architecture of Sound: An Interview on Soundctuary at Treasure Hill

Brian Hioe:  Could you first introduce yourself?

Petr Danda:  I’m Petr. I’m from the Czech Republic. I work as a freelance architect, I also do some music. I came to Taiwan to do an art residency. Actually, I’ve been to Taiwan before. I studied in Taiwan on exchange six years ago. So I know a little bit about the cultural scene from back then. Although back then, I wasn’t that able to get around with the languages yet.

BH:  Can you talk a bit about Soundctuary then?

PD:  With 音廟 or Soundctuary, I wanted to temporarily take a step away from conventional architecture and focus on the intersection of architecture and music or the performing arts. The concept is based on a few core ideas:

From an architectural point of view buildings designed and dedicated to certain purposes such as living, commercial, opera, exhibition, etc. I discovered there’s no building typology that is devoted specifically to the listening experience. Sure, you have the theaters or the bars, but sound is only secondary there, you don’t only go to listen to music, you go to socialize. Even in a concert hall, you don’t only go listen to a concert, you say you go see a concert. I wanted to create a space that you can just go and sit down or lie down and do whatever you feel is comfortable and really reduce the other senses, such as the visual part. And to just focus on the listening part. I figured out that many times, when we listen to music, it’s a secondary experience.

BH:  The visual is still primary.

PD:  Yes, even in everyday life, listening to music is often a background activity while we do other things such as working or driving. Only sometimes when I’m sick or I don’t know what to do, I just lie down on the floor in my room and close my eyes and listen. Then I start feeling, “Wow, this is great.” You discover more layers in the songs. You start to wonder why you don’t do this more often? Because there’s no dedicated place to do it.

So Soundctuary is a play on sanctuary and sound. Sanctuary can mean anything. It can be a room or a place in the forest behind your house. Or 7/11. Whatever. I’m not sure what it is for you. [Laughs]

Because in the pre-modern world, before theaters and bars and concert halls existed, cultural events took place in the temples and churches. Since we moved into this modern or more contemporary society, other institutions took over those functions. When you socialize, you don’t really go to the temple anymore. When you go see an art show, you go to a gallery. It’s the same with performances. So all those building typologies got created, they took over the roles from the temples. But none of them is purely focused on the sound or the audio. So that’s why it’s a “temple.” Not in the sense of a religion, but in the sense of community center, like temples used to be.

This prototype of the Soundctuary I made in Treasure Hill, which is a little village in Taipei. I thought it’d be nice to create this little community center where sound events can happen.

I hope to invite sound artists, Taiwanese or otherwise, who want to share stories or perform. And to do it in a way that the speech or the audio and the listening takes up most part of the listeners’ senses.

BH:  Can you talk about the two different rooms you have in Soundctuary?

PD:  I built this temporary structure around a ruin in Treasure Hill. It’s the house of a former evicted resident of Treasure Hill. There are two little symmetric rooms that I found quite nice. Because of COVID-19, I couldn’t organize the performances back in June and July, so the deal was that I could hold those events later and in the meantime do an exhibition, in which I tried to show the concept of the Soundctuary and the events, through a sound piece and installation.

As 音廟 basically means temple of sound, and each temple has a shrine to the earth god or Mazu or other gods, my temple also has a few shrines. In one room, the “shrine” is dedicated to the human voice. If you have a wish, such as if you want to change something in your life or in society, to make this happen, how do you get this thing out into reality? The first or the second step is to voice it out for yourself.

So I put a speaker--which you have everywhere in the public space in Taiwan, from prisons to shopping centers, cars, and shops--and there’s a set of mirrors. You put your phone in the incense burner, the phone being the incense symbolically and you record your wish. The set of mirrors reflects your mouth into the phone camera. It’s kind of recording your wish for yourself, to remind yourself in the future, what you want to work on. I hoped to show just how powerful the human voice actually is.

The second room just tries to showcase the concept of what I call storytelling sessions. The room looks a bit like a White Terror prison cell. There was a barrel that was already there, but I thought it fits in with the notion of nuclear waste, Green Island, etc. I went to Jingmei to see the White Terror Museum. I found a book done by a researcher, Lin Chuan-kai. He made a very beautiful publication about unjust trials in the air force headquarters, back in the 40s and 50s. There was this list of people that got unjustly tried there. I felt that this was such a powerful and nicely made publication, but when I talked to my foreign friends, it was hard to get them interested because it was black and white information.

In general, pure data is hard to get someone interested in. So I thought, why don’t we take this data and record it as audio. With the help of a friend, I recorded those texts and added some sound effects to underline the atmosphere, the anxiety that those people probably felt. So yeah, with this sound piece I tried to find a more interesting medium on how to express heavy data to someone, such as the younger generation. Because you might be more interested in listening to sound art or a song or audio instead of reading data as a text, unless you’re really interested in the topic.

BH:  What about your plans for programming, coming up? What events have you done so far?

PD:  The first event was with a Taiwanese band, Sign of Human. I’ve been listening to them for quite a few years now. I feel they’re the most underrated band in Taiwan. I find it interesting, because all the lyrics deal with the dark side of the human psyche. Nightmares, depression, life in Taipei for the young generation. I thought it would be a really good match.

We combined the concert with a Q-and-A session, where they were talking a bit about writing as an output for your mental distress. I called it a “Healing Listening Session,” since it’s not only a concert, there’s another dimension to it. 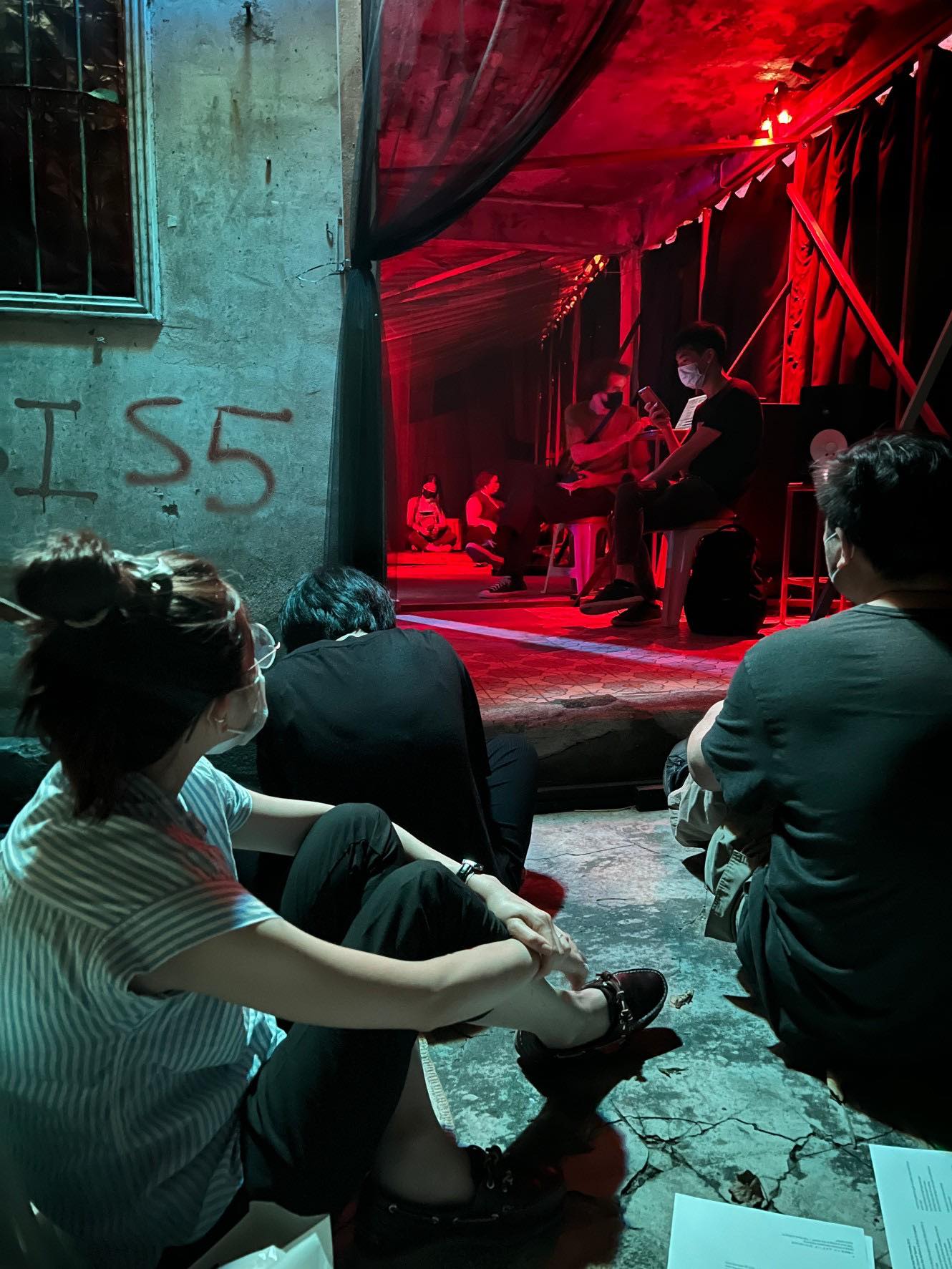 The second event we had was with you. It was a “Commented Listening Session.” I wanted to gather people in the 音廟 for a sit in--there are a few fake grass mattresses for that. We were gathering diverse protest songs, songs that became carriers of values in various social movements. After each song, we were commenting on the historic context, the impact, and a bit about the musical part of it.

Basically, this Soundctuary is running for one month. I’m just trying to experiment with different events. In the future, a real Soundctuary as a building, while this is a temporary prototype, might take place. In the meantime, there will be some more events.

There will be some sound artists coming, they will have a communication between them and a PC, talking about their life in Taiwan as migrants. I hope at the end of October, there will be a storytelling session. With these sessions, I’m trying to combine someone who has something to say about their life story, such as a political victim, or about a cause, like an environmental activist with a sound artist or DJ, who is going to add some sound collage or ambient sounds, to create a new format that makes this whole story easier to absorb for people. And to reach a different audience, such as the younger generation, because you know a monologue or speech is not the best way to get their attention. Another experiment with new formats. That will hopefully be on October 29th.

Then there will be some deep listening sessions. It’ll be the concept I mentioned before, where I want to invite people to come and close their eyes and lie down and just focus on the sound. So we’ll have an Italian deep techno listening session and so on. But it’s an open call, so anyone is free to propose an event and we can talk about it.

Soundctuary (音廟)  runs in Treasure Hill until the end of October. Find out more info here